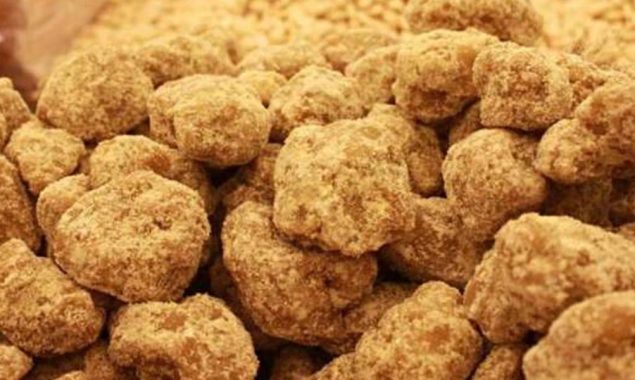 With the arrival of winter, jaggery production in the rural areas of Sargodha is done vigorously, indigenous jaggery is also prepared in indigenous ways.

Due to its warming effect, jaggery is considered a special winter gift and is best used in cold weather.

Sugarcane juice is extracted inside a wooden frame where after cooling it is made into pellets and sent to the market for sale.

In most of the villages of Sargodha, small farmers and landlords have started producing jaggery due to non-payment of dues by some sugar mill owners.

Jaggery contains carotene, nicotine, acid, vitamin A, vitamin B1, vitamin B2, vitamin C as well as iron and phosphorus.

In the winter season, by making jaggery and black sesame laddoos and eating them in the morning and evening, the body develops strong immunity against cold and is also beneficial in cough, asthma and bronchitis etc.

Its use has numerous benefits which are as follows:

4. It is very useful in asthma, cough and chest pain when cooked and eaten along with black pepper and ginger.

5. Let’s mix salt and honey in a jar and then burn it and lick it, it is useful for cough.

6. If molasses is added to the meat, it will rot quickly.

7. In some medicines, doctors use molasses instead of honey.

8. Gives strength and fat to the body.

9. A year old jaggery purifies the blood and increases fire. But its excessive use is also harmful.

10. Use of jaggery is harmful for teeth and blood.

11. Jaggery is more useful than sugar and is not so harmful.

On the other hand, its use can prove to be harmful for humans because it is a type of sugar and according to experts, excessive consumption of any kind of sweetness can make humans suffer from dangerous diseases.