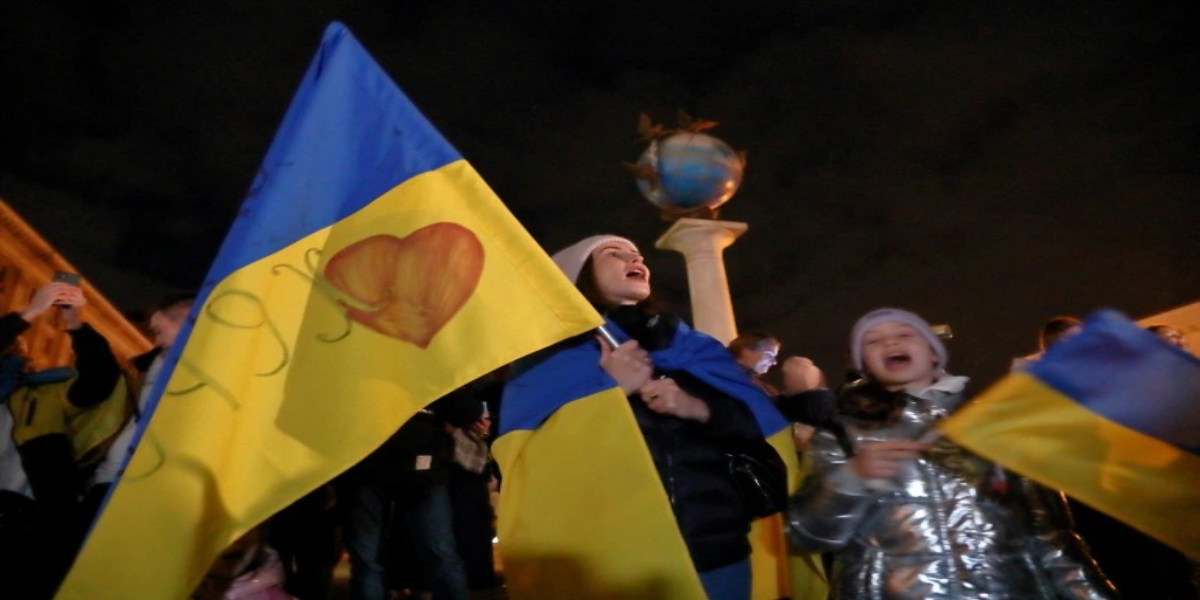 Citizens celebrate after the withdrawal of Russian forces from the Ukrainian city of Kherson.

According to details, as Russian troops pulled out of Kherson, the Ukrainian national anthem was played in the central Kherson Square after Kyiv’s forces entered, and citizens cheered the withdrawal of Russian forces.

Citizens took to the streets of the southern Ukrainian city of Kherson to celebrate Russia’s withdrawal, one of the most significant military successes by Kyiv’s forces since Moscow invaded nearly nine months ago.

Kherson resident Olha Pylypyona said she could not find words to describe her relief after Ukrainian special forces entered on Friday.

When Ukrainian forces entered Kherson smiling, citizens chanted “Glory to our heroes” and “Glory to Ukraine”.

In Kherson, Ukraine’s strategic port city on the Black Sea, the Ukrainian national anthem played in central Kherson Square as a small crowd gathered around a bonfire and sang.

When Russia withdrew its troops from the city on the eastern bank of the Dnieper River, Ukrainian President Volodymyr Zelensky declared Kherson “ours”.

Zelensky wrote in a telegram that special units are already in the city, and also posted photos of Ukrainian soldiers gathering with residents.

Kiev, the capital of Ukraine, also erupted in joy at the news, with citizens draped in their national flags and singing the national anthem gathered in Kyiv’s main square.

“I didn’t believe it at first, I thought it would take weeks and months, a few hundred meters at a time, and now we see them reach Kherson in a day,” said Artem Lukyu, 41, a Ukrainian citizen. Yes, this is the best surprise.

The reporter of the foreign news agency said that the withdrawal of Russian forces from Kherson is the most decisive event of this war so far.

The reporter added that this has boosted the morale of Ukrainian soldiers who say they now believe they can win the war.

Hundreds of people in the cruise ship suffered from Corona, the ship was stopped in Sydney
Hurricane Nicole hits the US state
Comment