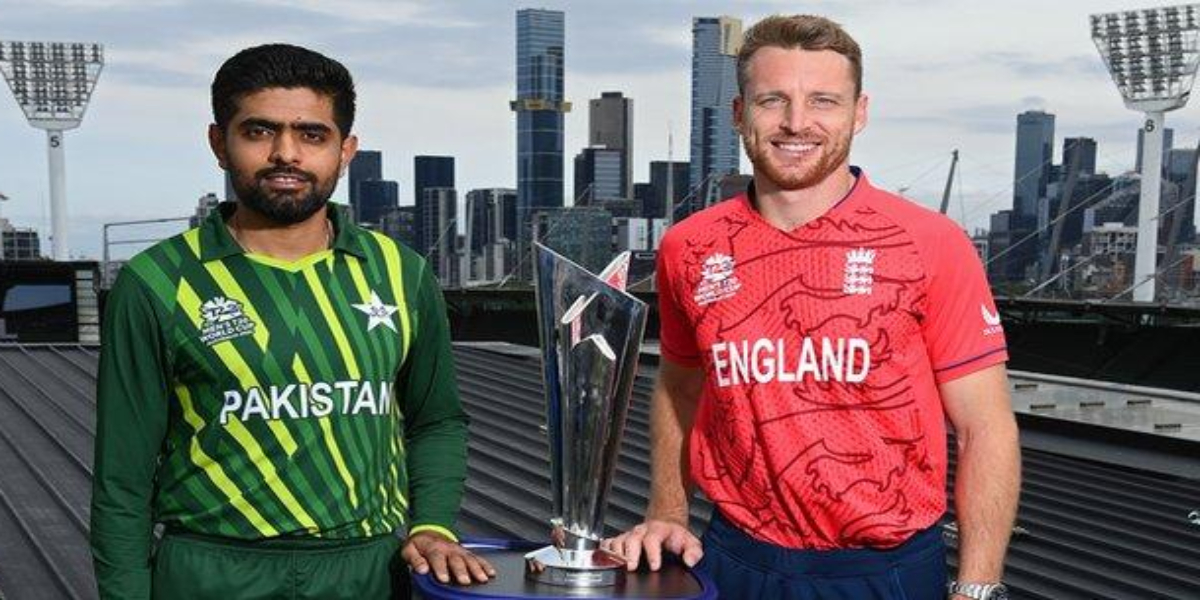 According to the details, in this match to be held in the famous cricket stadium of Melbourne, Australia, the teams of Pakistan and England will fight for the world title amid thundering clouds.

The prize money of 1.6 million US dollars and the Chichmamati trophy will be decided today. All eyes are on Melbourne.

12 teams participated in the event, which were divided into two groups to qualify for the T20 World Cup 2022.

From the start of the qualifying round between Sri Lanka and Namibia on October 16, 2022, it was understood that this event is an event of upsets. In this match, Namibia defeated Asian champions Sri Lanka by 55 runs in the first upset of the event.

As the Super 12 began, the battle between the teams for the top spot in the group stage began, with Pakistan playing their first match against arch-rivals India in Melbourne, which India won after a thrilling contest.

Pakistan faced Zimbabwe in the second match, in which Zimbabwe inflicted an incredible defeat on Pakistan, ending the Pakistani team’s hopes of winning the World Cup.

After the defeat against Zimbabwe, the Pakistan team fell victim to the situation like in the past, in order to reach the semi-finals, Pakistan had to win the remaining three matches of their group.

The Green Shirts repeated the feat of 1992 in this event and won their last three matches, before the final match against Bangladesh, the eyes of the Pakistani team and the entire nation were on the match between South Africa and the Netherlands.

In the semi-final, Pakistan faced the dominant team New Zealand in the first position of Group 1. The New Zealand team batted first in this match and set a target of 152 runs.

Pakistan openers Mohammad Rizwan and Babar Azam, who were criticized throughout the event, silenced the critics with a century partnership to beat New Zealand by ten wickets.

In Group 1, apart from New Zealand, England also qualified for the semi-finals.

England defeated Afghanistan in their first match to reach the final of the event, the second match against Australia was rained out and both teams were awarded one point each.

England defeated New Zealand by 20 runs in the group match against Sri Lanka by 4 wickets while England’s unexpected defeat by DLS against Ireland in the rain-affected match surprised everyone.

The second semi-final of the T20 World Cup 2022 was played between England and India, India played first and set a target of 168 runs, which England achieved in 16 overs for the loss of no wicket and defeated India in a crushing defeat.

The final will pit the best bowling attack of the tournament against England’s fearsome batting line-up at the Melbourne Cricket Ground. Pakistan’s left-armer Shaheen Afridi, fast bowler Haris Rauf and leg-spinner Shadab Khan are among the best players in the world.

All the tickets for the final have been sold out. The stadium with over 90,000 spectators is expected to support Pakistan.

Buttler’s side reached the final with a stunning 10-wicket victory over India on Thursday, their best performance in a campaign that has been plagued by group stage defeat by Ireland.

Pakistan had a rough start, losing their first two games and winning four in a row to book their place in the final.

Interestingly, the two teams had a seven-match series in Pakistan just five weeks before the World Cup in which England defeated Pakistan by 4 matches to 3.

Buttler played down the significance of the victory, saying the final would be played in completely different conditions in Australia.

He also said that fast bowler Mark Wood and batsman David Mullan, who were both ruled out of the semi-final due to injury, are improving and are not far from being selected for the final.

Wood, it should be noted, was a doubt over his participation on Friday, but bowled well in the nets yesterday after both bowlers passed fitness tests.

The Melbourne Cricket Ground holds significance for Pakistan as the Green Shirts crowned world cricket’s reign in 1992 by defeating England by 22 runs in the 50-over World Cup final for the first time.

Incidentally, Pakistan faced New Zealand in the semi-finals 30 years ago, the same opponents they swept in the last four on Wednesday.

Former batsman Ramiz Raja, who was part of the 1992 playing squad and is now the chairman of the Pakistan Cricket Board, spoke to the players about the win.

Former Australia opener Matthew Hayden, who is part of Pakistan’s coaching staff, said he was reliving some of the stories surrounding the ’92 World Cup.

It is a golden opportunity for Pakistan to win this final and win the trophy like West Indies did twice before Pakistan did this feat under the leadership of Younis Khan in 2009.

If England win today’s final, it will be the first time they have won the short-format title for the first time, having won the 50-over World Cup in 2019.

Today’s final of T20 World Cup 2022 has been kept as an extra day due to rain and four more hours have been given to decide the final.

According to meteorologists, the rain forecast on the day of the final today has improved compared to recent days, but disruptions are still likely.

According to the ICC, every possible effort will be made to complete the match on Sunday, even if it means playing a shorter match.

If rain affects the final, the minimum length of the final will be 10 overs per side.

If this is not possible, the match will be resumed on Monday from the same place it ended today.

But if the match does not end, then Pakistan and England will share the trophy.

The final will start at 1 PM Pakistan time.