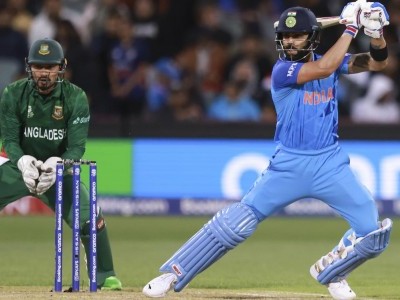 Adelaide, October 3 (SO News/Agency) In an important match of T-20 World Cup 2022, India defeated Bangladesh by 5 runs under the Duckworth-Louis rule. Batting first after losing the toss in the match played at Adelaide Oval, the Indian team scored 184 runs for 6 wickets. After that, due to rain, the Bangladesh team got the target of 151 runs in 16 overs but they could only score 145 runs for 6 wickets.

Liton Das (60 off 27 balls), who was batting dangerously before the rain interruption, was run out by Team India chasing a revised target (151 runs) after the rain stopped, and the match slowed down thereafter. But the grip of Team India became stronger. Bangladesh needed 20 runs in the last over to win but despite all their efforts, their players managed to score only 14 runs and the match went to India. Team India has now topped Group Two and is assured of a semi-final berth.

After registering a win against Bangladesh, the Indian team topped their group and made their way to the semi-finals easier. Now India can easily reach the semi-finals by defeating Zimbabwe. A win against Zimbabwe would take India to eight points which would be impossible for Pakistan and Bangladesh to reach. If India lose to a weak Zimbabwe, net run rate could be an issue with Bangladesh or Pakistan.

Thus, Pakistan will expect Zimbabwe to defeat Bangladesh while Netherlands will defeat South Africa. In such a scenario, they could overtake South Africa on points or become a net run rate affair with India. Overall, India’s win against Bangladesh makes it very difficult for Pakistan to reach the semi-finals.