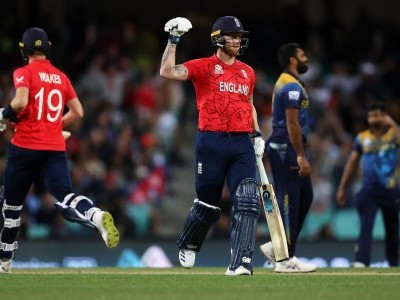 Sydney, November 5 (SO News/Agency) In the T-20 World Cup today, a very interesting match was played between Sri Lanka and England in which the England team won by 4 wickets with two balls remaining. England’s win has seen host Australia out of the tournament. The two teams that reached the semi-finals from Group-1 are New Zealand and England. Notably, New Zealand, England and Australia have 7 points each, but New Zealand topped the group on the basis of improved net run rate, while England and Australia finished second and third respectively. . Sri Lanka finished fourth with 4 points, Ireland fifth with 3 points, and Afghanistan sixth with 2 points.

Ben Stokes’ 44 in the Sri Lanka vs England match helped England beat Sri Lanka in a thrilling Super 12 match of the T20 World Cup. Sri Lanka had set a target of 142 runs in front of England with the help of Patham Nissanka’s (67) half-century in the Group-1 match. Nissanka scored 67 runs off 45 balls with two fours and five sixes to take Sri Lanka to a respectable score, while Bhanuka Rajpakshe scored 22 off 22 balls.

Chasing the target in a do-or-die match, England scored 75 runs without losing a wicket, but Sri Lanka’s spin bowlers added to their woes here. Vinandu Hasringa and Dhananjay De Silva took four wickets while reducing the pace of runs while Lahiro Kumara also sent two batsmen to the pavilion. Thanks to Sri Lanka’s brilliant bowling in the middle overs, England’s score went from 75/0 in 9 overs to 129/6 in 18 overs.

While wickets continued to fall at one end, Ben Stokes held on at the other and ensured England’s victory in a low-scoring match. Stokes scored 44 not out with the help of two fours off 36 balls while number eight batsman Chris Woakes (05 not out) hit a boundary on the fourth ball of the twentieth over to take England to the target.

The fourth umpire referred the appeal of the fake fielding to the field umpire, the Bangladesh coach
The former Indian cricketer termed Kohli’s fielding as wrong
Comment