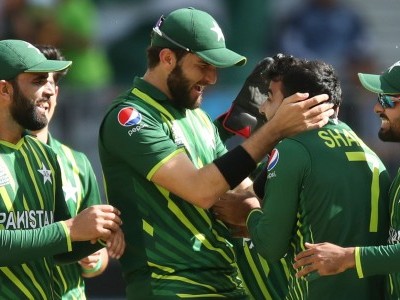 Adelaide, November 6 (SO News/Agency) With the help of Shaheen Shah Afridi (22/4) and Mohammad Haris’ explosive 31 runs, Pakistan beat Bangladesh by five runs in the Super-12 match of T20 World Cup 2022 on Sunday. Defeated by wickets and made it to the semi-finals of the tournament.

In the Group 2 match, Bangladesh had given Pakistan a target of 128 runs, which Pakistan achieved with 11 balls remaining. The match was essentially a quarter-final as South Africa had lost to the Netherlands in the opening match of the day and the winner would advance to the semi-finals.

Shaheen regained his momentum in this crucial match, taking four wickets for just 22 runs to restrict Bangladesh to 127 runs.

In pursuit of the target, when Harris came to bat, Pakistan needed 67 runs from 52 balls. Haris scored 31 runs off 18 balls with the help of one four and two sixes to pave the way for his team to reach the semi-finals.

With this win, Pakistan became the second team in Group 2 to reach the semi-finals after India. Bangladesh won the toss and elected to bat and proceeded with the innings easily, losing the wicket of Latin Das (10) early. Najamul Hasan Shanto and Soumya Sarkar put on 52 runs for the second wicket.

Shantu scored 54 runs in 48 balls with the help of seven fours while Soumya Sarkar scored 20 runs in 17 balls. Shantu-Soumya partnership was leading Bangladesh to a big score but Shadab changed the direction of the match by dismissing Soumya and captain Shakib Al Hasan in the 11th over.

From here, Bangladesh’s wickets began to fall. Although Afif Hussain scored an unbeaten 24 off 20 balls, other middle-order batsmen could not even touch double figures and Bangladesh were restricted to 127/8.