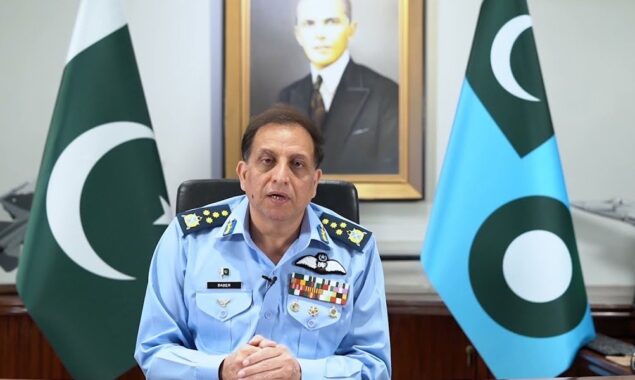 Air Chief Marshal Zaheer Ahmad Babar Sidhu has said that the Pakistan Air Force is trying to prepare modern technologies at the national level, thanks to modern technologies, Pakistan’s air defense can be made modern, efficient and invincible.

The spokesman said that the chief of the Pakistan Air Force mentioned the comprehensive plans to promote domestic production of existing and emerging disruptive technologies in aerospace, cyber, IT and other sectors.

He said that this project will transform the national landscape with innovation centers for design, research and development and emerging disruptive technologies and achieve maximum social, economic, security and scientific benefits for the country through this project. can go

According to the spokesperson, PAF is showcasing advanced aerospace, avionics, cyberspace and other related technologies at Ideas 2022.

The spokesman said that the National Aerospace Science and Technology Park project included in the Pakistan Air Force Pavilion is an important step for establishing linkages between industry and education sectors and in this project, the first national aerospace cluster, universities and aerospace at the regional level. , including establishment of cyber, IT and software technology parks.

The spokesperson said that the exhibition will play an important role in strengthening Pakistan’s strategic relations with the international community and achieving the common goals of global peace and stability.

The spokesman said that during the two meetings, matters of professional and mutual interest were discussed.

On this occasion, the Chief of the Pakistan Air Force said that there is a long-standing religious, cultural and historical relationship between Pakistan and Bahrain, which is a manifestation of the strong ties between the air forces of the two countries.

The spokesperson said that during the meeting with the Commander of the Azerbaijan Air Force, Lieutenant General Ramiz Taharov, the Chief of the Pakistan Air Force said that Pakistan values ​​its strong diplomatic, economic and defense relations with Azerbaijan.

According to the spokesman, the commander of Azerbaijan Air Force, Lieutenant General Ramiz Taharov, expressed his heartfelt condolences to the people of Pakistan for the loss of life during the flood disaster.

The spokesman said that the commander of the Azerbaijan Air Force appreciated the efforts of the Pakistan Air Force for the relief and rehabilitation of the flood victims and the two sides agreed to further improve the already established bilateral military relations, especially in the training and operational areas. .

Maryam Aurangzeb challenges Imran Khan to go to court – Hum News
Do not talk here and there! Bring out the receipts, Maryam Nawaz
Comment