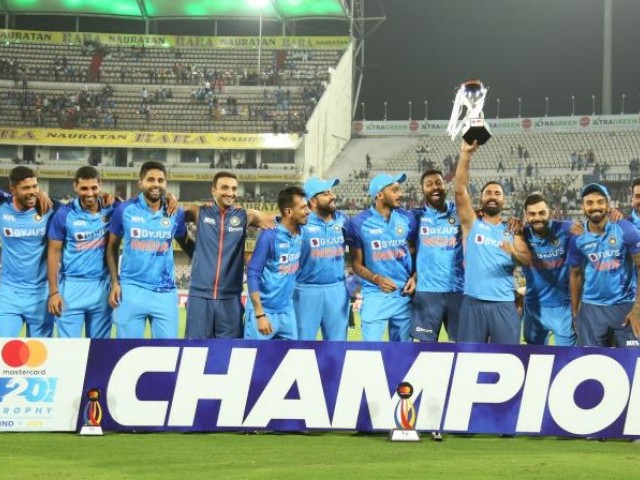 Hyderabad, September 26 (SO News/Agency) India won the third T on Sunday thanks to the explosive innings of Hardik Pandya (25 not out) after strong half-centuries from Surya Kumar Yadav (69) and Virat Kohli (63). – Defeated Australia by six wickets in Twenty20 to win the series 2-1. Australia had set India a target of 187 runs which Team India achieved with one ball to spare.

India’s pursuit of the target did not get off to a good start and opener Lokesh Rahul returned to the pavilion after scoring a run in the first over. Skipper Rohit Sharma showed aggression by hitting Josh Hazlewood for a six, but he too was out for 17 (14) with the help of two fours and a six.

Surya Kumar and Virat Kohli then took over the Indian innings and defeated the Kangaroos with a century partnership. Surya Kumar completed his half-century with a six off Adam Zampa in the 13th over, though he was caught on the boundary in the 14th over. Kohli and Hardik then shared a partnership of 48 runs in 32 balls for the fourth wicket. India needed 11 runs from the last over. After hitting a six off the first ball, Virat was caught on the boundary on the second ball, after which Hardik hit a four off the fifth ball of the over to hoist the flag for India’s victory.

For Australia, Daniel Sams took two wickets for 33 runs in 3.5 overs, while Hazlewood and Pete Cummins took one wicket each for 40 runs in the quota of four overs. Cameron Green conceded 14 runs in three overs but did not get a wicket.