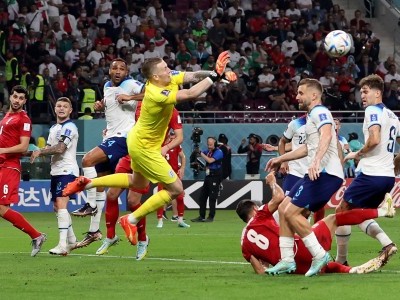 Doha, November 22 (SO News/Agency) In the first match of the second day of the football world cup being played in Qatar, England defeated Iran by 6 goals to 2 goals in a one-sided match. Iran was never seen competing in this competition. In the first half of the game, Iran did not appear anywhere in front of England in terms of possession. England kept 82% of the ball while Iran kept only 18%. This rate itself indicates how one-sided the competition was.

Shortly after the start of the match, Iran had to replace its goalkeeper after he collided with his own defender while trying to stop the ball and was seriously injured. Even after a lot of treatment, when he found himself unfit to play, he signaled the Iranian team’s coach and manager to get out. It was a big blow for Iran.

When play resumed after a change of goalkeeper, 19-year-old Bellingham, England’s youngest ever player, scored a superb header in the 35th minute and it looked like a flurry of goals would follow. After that, 21-year-old Saka scored a brilliant goal in the 43rd minute, followed by 28-year-old star Sterling in the 45th minute.

In the second half of the game, Saka scored another goal in the 62nd minute to make the score four in favor of England. Soon after, new Iranian player Tarimi scored a brilliant goal, but Iran’s joy was short-lived and England’s replacement for Sterling, Rashford, scored a brilliant and easy goal, followed by Saka. Substitute Grealish scored a goal to make the score 6 goals in England’s favour. 14 minutes of extra time were given in the first half while ten minutes were given in the second half. At the end of injury time, Iran received a penalty which was easily converted by Tarimi. England won the match by 6 goals to Iran’s two goals.

In the second half, Iran played a bit better and they conceded three goals in the second half while they also scored two goals. Due to their better play, there was a slight decrease in the possession of the ball and according to the final score, England kept 79% of the ball while Iran kept 21% of the ball. Today, the next match of Holland will be against African team Senegal.