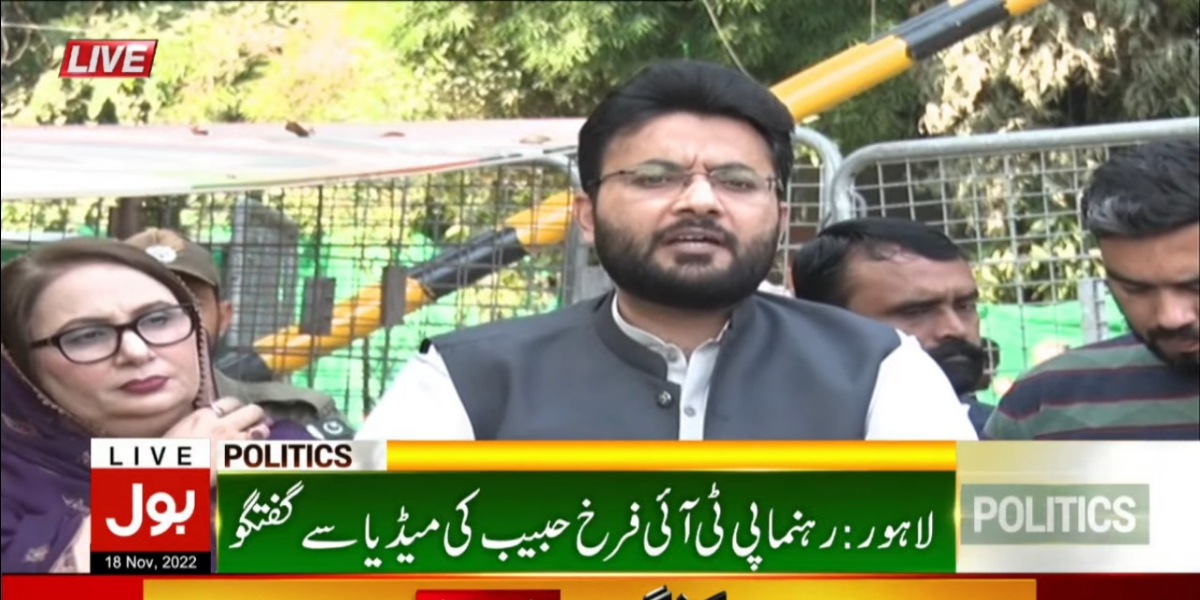 Lahore: Pakistan Tehreek-e-Insaf (PTI) leader Farrukh Habib has said that the imported prime minister is running the economy and not the country.

PTI leader Farrukh Habib while talking to the media at Zaman Park said that the injured Imran Khan is worried about Pakistan, Imran Khan has shown proof of being a responsible leader after the assassination attack.

‘Tomorrow will be a memorable day in the country’s history’

He said that Imran Khan will announce the tarik of reaching Rawalpindi tomorrow, Long March will reach Rawat tomorrow, Imran Khan will make an important announcement, tomorrow will be a memorable day in the country’s history.

Farrukh Haib said that the country should be led towards immediate elections, people have to decide whether to stand with thieves or not, gang of thieves only come to rule in Pakistan.

The country is currently facing a political and economic crisis.

The PTI leader said that the 50-year-old record of inflation has been broken in the country, while foreign investment is negligible.

Farrukh Haib further said that the economy is not run by the Prime Minister of the imported government, the country is currently facing a political and economic crisis.

Real Azadi March of Pakistan Tehreek-e-Insaf has reached Chakwal on the 9th day of the second phase.

Leader of Tehreek-e-Insaf Pir Waqar will welcome the convoy under the leadership of Central Secretary General Asad Umar on reaching Kaler Kahar Interchange at 11 am.

The actual Azadi March convoy will reach Haral Chowk at 3:30 pm, where Tehreek-e-Insaf leader Raja Tariq will give a reception.

According to the sources, a public meeting will be held in Chakwal regarding the real freedom march, Central Secretary General Asad Umar will address the participants of the march at 4 o’clock in Chakwal.

In Chakwal, arrangements will be made to show the address of Chairman PTI and former Prime Minister Imran Khan live on the big screen.

On which day to go to Rawalpindi, I will announce tomorrow, Imran Khan – Hum News
Threat alert of attack on Lal Shahbaz Qalandar shrine
Comment