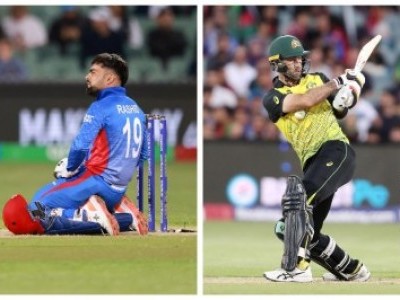 Adelaide, November 4 (SO News/Agency) Australia defeated Afghanistan by four runs in a thrilling match of the Super-12 T20 World Cup 2022 on Friday thanks to Glenn Maxwell’s (54 not out) brilliant half-century. Keep your hopes of reaching the semi-finals alive. In the Group One match, Australia set a target of 169 runs to Afghanistan, in response to which Afghanistan could only score 164 runs.

However, in this match, thanks to Rashid Khan’s 48 runs, Afghanistan’s batsmen fought hard. Rashid hit 3 fours and 4 sixes in his 23-ball innings.

Chasing the target, Afghanistan scored 98 runs for the loss of two wickets in 13 overs, but Gulbuddin Naib (39) was run out in the 14th over and the series of wickets for the Afghan team started. Afghanistan lost four wickets within four runs which made their chances of victory difficult. Rashid Khan, who came to bat at number eight, scored 48 runs off 23 balls with the help of three fours and four sixes, but could not lead his team to victory.

Australia’s chances of reaching the semi-finals remain strong with seven points from five matches, although their run-rate is worse than England’s. England, third in Group 1 with five points, will crash out of the tournament if defending champions Australia win their match against Sri Lanka on Saturday.

Afghanistan won the toss and asked Australia to bat and in the absence of Aaron Finch, Cameron Green, who came in to open, was dismissed for two runs. David Warner (25) looked in good form with five fours but was bowled trying to reverse-sweep off Naveen-ul-Haq.

Australia scored 133 runs in 15 overs but Afghanistan took four wickets for just 35 runs in the last five overs to prevent Australia from going for a big score. However, Maxwell struggled from one end and took Australia past 160. He hit six fours and two sixes in his 32-ball innings of 54 runs.

Chasing the target, Afghanistan lost the wickets of Rahmanullah Garbaz and Usman Ghani in the powerplay, though they also added 47 runs in the process. Ibrahim and Gulbuddin’s partnership hurt Australia’s chances of reaching the semi-finals and put Afghanistan in a strong position in the match.

Gulbuddin scored 39 runs in 23 balls with the help of three fours and two sixes while Ibrahim scored 26 runs in 33 balls and the two made a partnership of 59 runs.

Afghanistan scored 98 runs in 13 overs but Gulbuddin was run out on the first ball of the next over due to Maxwell’s brilliant throw. This started Afghanistan’s losing streak and when Rashid came to the wicket, their score was 103/6 in 14.3 overs.

However, Rashid made the match sensational by playing an explosive innings of 48 runs. Thanks to Rashid, Afghanistan added 44 runs in the last three overs but the team could not reach the score of 164 runs. For Australia, Josh Hazlewood and Adam Zampa took two wickets each while Kane Richardson took one wicket.