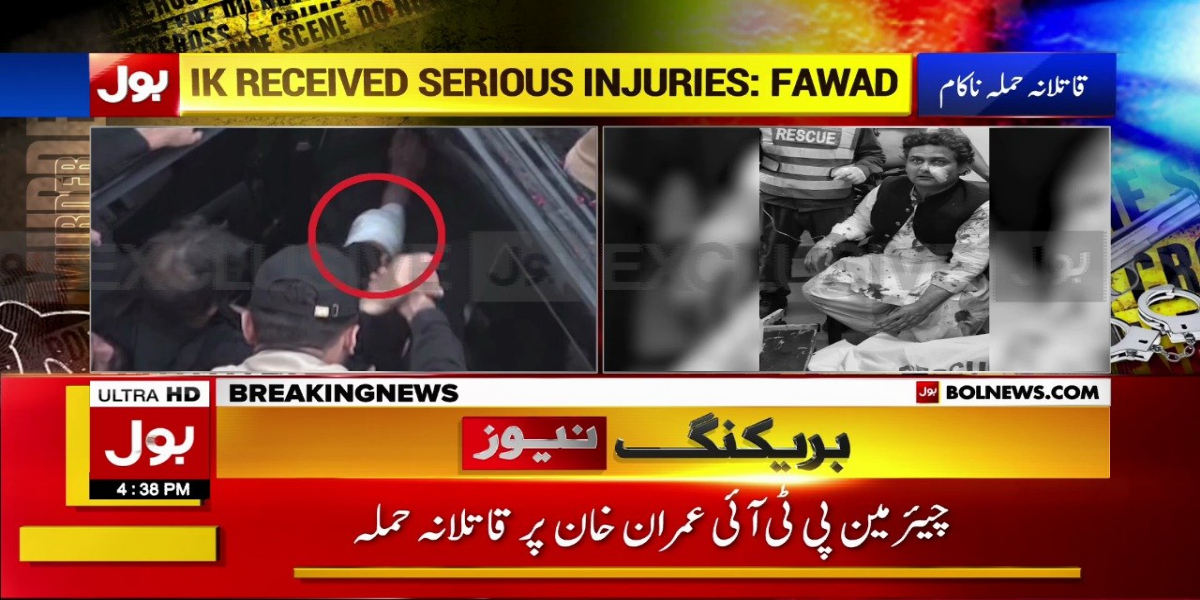 At the beginning of the long march in Wazirabad, Pakistan Tehreek-e-Insaf Chairman Imran Khan was injured in a firing incident near his container.

According to initial reports, this incident of firing has been termed as a murderous attack on Imran Khan in which Faisal Javed was also seriously injured. Besides, there are reports of 4 people injured.

Sources have said that due to the firing, Imran Khan’s leg has been hit by a bullet due to which he is slightly injured, but he is being immediately shifted from the container.

Sources say that meanwhile, Imran Khan is safely in his container while reports of injuries to 4 workers have been received who are being immediately shifted to the hospital.

Sources said that after the firing incident, the participants of the march ran away while the injured included Muhammad Yusuf and Hamid Nasir Chatta’s son Ali Chatta.

Vice Chairman of Pakistan Tehreek-e-Insaaf This is a cowardly and murderous attack, shifting the injured to the hospital is the first priority. He said that after every failure, there was a murderous attack on Imran Khan, first the government was removed and then cases were made against Imran Khan.

PTI Senator Faisal Javed said that our morale is high, the freedom movement will not stop now, Imran Khan is fine. “I’m fine, lots of prayers for you all,” he tweeted. Allah’s grace was done.

Leader of Tehreek-e-Insaf Farrukh Habib said that Ranathanaullah was repeatedly threatening to take the life of Imran Khan, today this coward attacked the leader of Muslim Ummah, Imran Khan, if anything happens to Imran Khan, the government will be responsible, this murderous minister. It’s the entrance that made Model Town atrocious.

Ali Zaidi says that we feel like cutting the hand that is raised towards Imran Khan, the nation loves Imran Khan dearly.

He said that PTI was marching on peace, the conspiracy to stop and intimidate Imran Khan will fail, this kind of cowardly action gives more strength to Imran Khan’s determination.

He further said that the nation should pray for the speedy recovery of all the injured including Chairman Imran Khan, now no one can stop the sea of ​​people from coming to Islamabad.