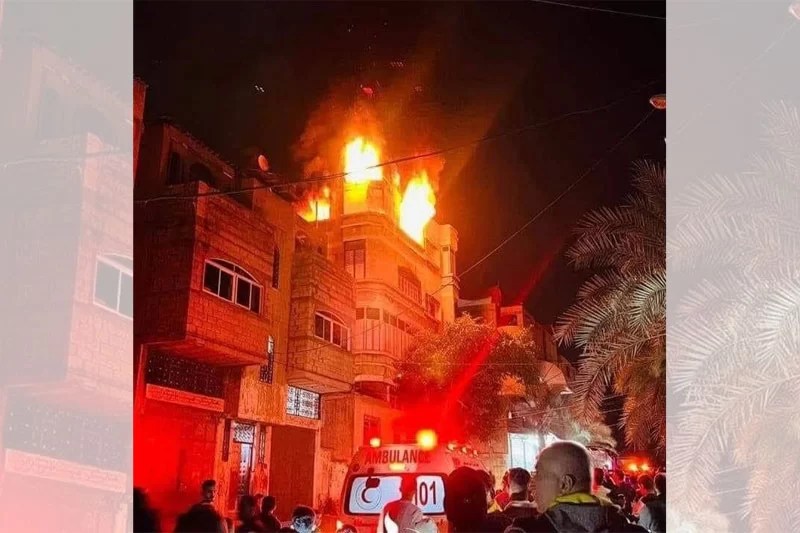 Gaza, November 18: (SO News) 21 members of the same family died as a result of a terrible fire in a residential building in the northern Gaza Strip of Palestine. Including seven children. It has been reported that more than 30 people have been injured in the accident. The incident took place on Thursday evening.

According to sources, a fire broke out suddenly on the third floor of the residential building of the refugee camp, which later spread. All the dead people belong to the same family, several people have been burnt in the fire, who have been shifted to the hospital for medical assistance.

According to the authorities, petrol was kept on the third floor which caught fire, it is being ascertained why the petrol was kept in the building, due to the fire, a large number of citizens gathered outside the building, this accident is recent. Being rated as the worst over the years. It is being told that the condition of some of the injured is serious.

A huge explosion in the city of Istanbul, Turkey, killed 6 people

Six people have been killed as a result of a powerful explosion in Istiqlal, the famous business center of Istanbul, Turkey’s largest city, on Sunday evening.

80 hours work in a week, work from home is over, free food is also over, Elon Musk shocked Twitter employees again.

Ever since Elon Musk took over Twitter, there have been a series of decisions that have shocked not only Twitter users but also the company’s employees. In a fresh decision, Elon Musk has again shocked employees, and this shock is not small, but very severe.

Stampede in South Korea; 149 killed, 150 wounded; Tragic accident due to large number of people entering the narrow street during the Halloween event

At least 249 people were killed and 150 others injured in a deadly stampede during Halloween celebrations in Seoul’s Atewon district on Saturday, fire department officials said.

Elon Musk is the new owner of Twitter; Many officials, including Indian Prag Agarwal, were dismissed

Elon Musk, the founder of the auto company Tesla and the American space craft company SpaceX, has become the new owner of the micro-blogging site Twitter. According to the news agency Reuters, Elon Musk finalized the deal of 44 billion dollars to buy Twitter on Thursday, and through a post on social media, Twitter …

Who will be the new head of the US House of Representatives after Nancy Pelosi? – Bol news
Why sent a cheap lehenga, the bride refused to leave – Bol News
Comment